Background: An electrochemical method based on cyclic voltametry techniques was used to measure the antioxidant activity of two ferrocene-nucleobases.

Objective: The present study aims to measure the antioxidant activity of two ferrocene derivatives bearing nucleobases; the technique is based on the reaction of the in-situ electrochemical generated superoxide anion radical with ferrocene-nucleobases.

Method: The decrease in the anodic peak current density of the O2 / O2 .− redox couple following the addition of ferrocene-nucleobases was used to measure the antioxidant activity and binding parameters of 1-ferrocenylmethylthymine and 1-ferrocenylmethylcytosine with superoxide anion radical.

Conclusion: Both 1-Ferrocenylmethylthymine and 1-Ferrocenylmethylcytosine showed higher antioxidant activity (0.34 ± 0.03 and 0.045 ± 0.02 mg/mL respectively) than that of standard antioxidant α-tocopherol (3.04 ± 0.03 mg/mL). The value of the binding free energy ranging from -16.1 kJ.mol-1 for 1-ferrocenylmethylthymine to -21.8 kJ.mol-1 for 1- ferrocenylmethylcytosine suggests an electrostatic interaction of superoxide anion radical with both compounds which has been found to be the dominant interaction mode. The kinetics of the interaction reaction of the compounds was quantified having second-order rate constant values equal to 4.0 and 16.5 M-1 s-1 respectively. 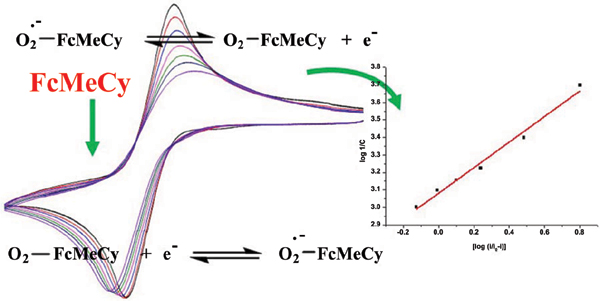